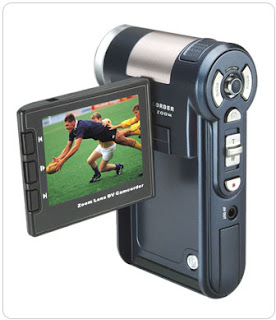 I bought a Aiptek hd720p pocket dv100 pro for my daughters birthday and decided to check it out and charge the battery before I actually gave it to her. I had a 2GB sd card hanging around and wanted to see if I could use it for this Aiptek hd720p camera.

The first thing I did was plug the aiptek hd720p mini video camera to charge it, then I inserted the sd card and pressed on the power button... The power came on but it had a message on the screen saying that the SD card was full... What? I had cleared the sd card of all files. Why was it saying it was full?

I tried everything.
Finally I found the solution. I removed the sd card, turned the aiptek hd720p power on, then it powered up and said, hey no card installed. This is when I installed the card, while the power was still on... Bang it worked....!!!!!

I recorded some video and took some pictures..

Then I connected the aiptek hd720p pocket dv 100 pro to the computer. (I have Windows Vista) It immediately popped up asking me if I wanted to get the photos and video off the camera... YAY it worked.

Spam and advertising will be removed. One link to a website is allowed.